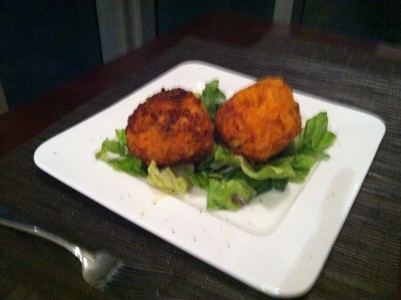 I might not be a Latina, but my SOUL is. Rellenos de Papa are AMAZING!

When we visited Puerto Rico, our friend’s Irmaliz and Ignacio gave us the local tour. They introduced us to this roadside restaurant called “Donde Olga”. We relaxed and drank local beer called Medalla and had some Puerto Rican noshes. While dining outside, we enjoyed the cool breezes and scents of smoked meat and fried treats. We had tons of things we’d never heard of before… alcapurrias, chicken and beef pinchos, bacalaitos(salted cod fritters) and our favorite Rellenos de Papa (basically a stuffed and fried mashed potato, usually has beef).

Since, then I’ve heard the constant yearning from both of the gentlemen in the house for rellenos de papa.  So, on one random weeknight as a little surprise, I finally tried to make these things. And let me tell ya, it really was a pain in the A$$.   There are a lot of steps involved, but it was an adventure and I”m glad we tried.

This YouTube video from “Elba” is what I watched to get the jist of it.

The Details: mashed potatoes stuffed with seasoned beef, rolled in to balls and fried.  We served over a nice light salad.  These little guys are a standalone meal. 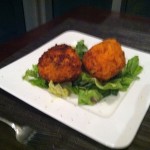 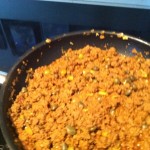 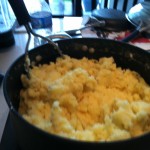 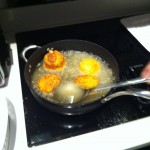 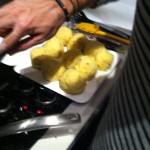 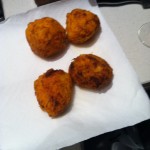 The smells that were taking over the house kinda took us back to that weekend we had in Puerto Rico.  And gathering around the kitchen, rolling, stuffing and frying these bad boys was really a group effort.  I think it made us appreciate these meat filled treasures a little more.