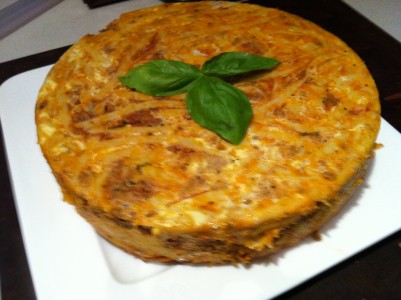 Leftover bolognese meat sauce can be a perfect “spaghetti pie” in NO time!

The bolognese meat sauce you made turned out alright, huh?  But now you are stuck with a mound of leftovers and don’t really want to eat pasta for the next week straight…so whattya do?  Do what I did and turn it into a “spaghetti pie” and impress your friends!

I never really understood the fascination with “spaghetti pie”.  To me, it just sounds like a huge pain in the ass and a lot of work– Make the sauce, make the pasta, mix the the pasta and sauce, let it cool….blah blah blah.  All for a damn “pie” that I’m going to cut into that will probably fall back in to looking like a plate of regular ‘ol spaghetti anyway?  Eh, not for me.   BUT, if I’ve already served a meal and have leftovers, well, that is a different story!

At 11:00pm, while dumping our leftover bolognese and linguine into a pie-pan and pouring eggs over it….

Husband: “what the hell are you doing?” 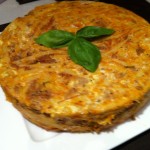 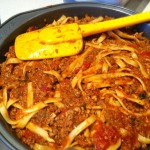 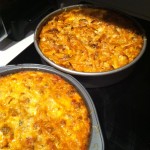 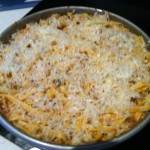 The Details: We tossed in our bolognese and pasta leftovers. Instead of just a couple eggs, we added about 8 to make it  like a frittata, so it could be eaten morning, noon or night. And it was.  It never appeared on the dining room table, but it disappeared over the course of the week, devoured by little creatures that quietly snacked late-night after a couple brewskies, or first thing in the morning before any one would notice.  Naughty. 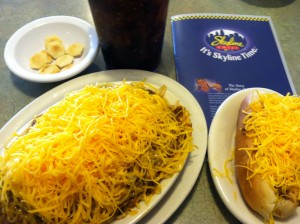 Living in Miami means not having immediate access to our favorite casual restaurant from back in Cincinnati. For those of you who have never enjoyed Skyline Chili or even heard of it, well, it’s a Cincinnati hometown tradition comprised of menu items like “3ways”, “4ways”, “5ways” and “cheese coneys”.  Sounds quite odd from an outsiders perspective! Skyline can only be found in Cincinnati (and a few satellite locations in other cities).  I’m not even going to get into the rivalry and debate over which chili is better, Skyline or Goldstar chili, because I’ll never get to tell you about the BEST SUNDAY EVER!

My husband, best friend and I had to take a trek to IKEA in Sunrise, FL (about

30ish minutes from us) and learned that there was a Skyline Chili just minutes from IKEA (we found a satellite location!!! God is great!) . All three of us were craving Skyline since we haven’t been home in while and had planned to have a gluttonous adventure.  Needless to say, we did NOT disappoint!

Restaurant: Skyline Chili in Sunrise – They have their own website and Facebook page, so check them out and give them some love

The anticipation of going to Skyline in Florida was crazy, so when we finally had that first bite, it was seriously pure happiness.  Gluttony ensued and we actually re-ordered more food after Round 1.  Kind of embarrassing, I guess, but definitely memorable!  We also found out they have a “Coney Cave”, which is a private dining room for large parties.  Guess where our next birthday celebration will be housed?!?!

And additional key component that will NEVER be forgotten is riding home in the back seat of the Jeep lounging on the IKEA couch we just got fixed, because there was nowhere else to sit and thinking about how I should have gotten a cheese coney for the road! 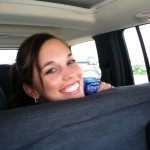 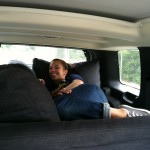